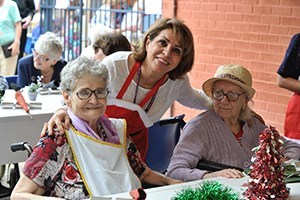 Manezheh during the Christmas celebrations at Vaucluse Aged Care Home.

At Hall & Prior, we employ people from all over the world, who each have different backstories that led them to their journey to care. Manezheh Jafari, who is the Deputy Director of Nursing at Vaucluse Aged Care Home in Sydney, is one of those people.

She grew up in Tehran, the capital city of Iran with her parents and six siblings. Manezheh has fond memories of travelling with her family to destinations like the Caspian Sea, and well as singing and playing guitar when she was a teenager. While she dreamed of one day studying medicine, her high school grades didn’t allow her entry into a medicine degree, so she decided to channel her passion for care into becoming a registered nurse.

While studying she also entered into the media industry, as an announcer and a newsreader for radio and television in Southern Iran. Unfortunately, she had to give up this role two years later due to pressures from the Islamic government.

In 1977 Manezheh graduated from her four-year nursing degree at Tehran University and began working at Burns Hospital, the biggest facility of its kind in Tehran. While she describes her early nursing career as challenging, it meant she was able to rise through the ranks quickly, and was promoted to Director of Nursing in 1980. 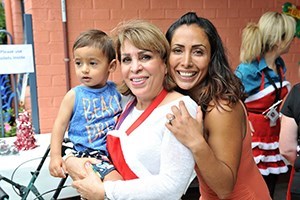 This was at a time of war between Iran and Iraq, and Manezheh and her colleagues were responsible for treating thousands of wounded Iranian soldiers. She describes the events that occurred back then as well as the horrors she had witnessed. On one particular occasion, she recalls being petrified and shaking in fear.

She, her family and others in the area saw a big fire coming from the sky which they knew was a bomb. She remembers waiting, wondering where it would hit and if this time it will be them who would perish. By sunrise the whole suburb next to them was gone and they had lost family and friends.

As heartbreaking and terrifying as this time was, as a nurse she knew she had to continue with her duties. Through her work she was helping soldiers who had lost limbs, been blinded or had burns over 90 percent of their bodies.

Manezheh would work 16-hour days, as there was a curfew during this period the night staff couldn’t come to work or go home. “It was a very distressing time. Speaking about it now has brought back so many memories,” she said.

In 1983, Manezheh, aged 29, made the long journey to immigrate to Australia with her husband and 3-month-old son Aryan, in order to escape the devastating conditions. Two years later, following the revolution in Iran, Manezheh’s older sister Mary (Sedigheh) Jafari immigrated to Germany with her husband and children.

Manezheh trained for six months at Liverpool Hospital in Sydney to complete her Australian nursing registration, and in 1986 she began her career in the aged care industry. “I was so happy working in an aged care home and caring for the elderly,” she said.

In 1992, Manezheh’s sister Mary and her family left Germany and settled in Sydney, joining the rest of her siblings, nieces, nephews and her mother in Australia. Mary followed in her sister’s footsteps and begun a career in aged care, working as a nurse in various aged care homes.

“Mary was always known for being full of life, caring and really hard working,” Manezheh said. “She really enjoyed the time she spent working in aged care and loved the residents she cared for.”

In 2008, Manezheh was working as Nursing Unit Manager in an aged care home when the opportunity came up to join the team at Vaucluse Aged Care Home, in Sydney’s east.

“It was quite far away from my home but that didn’t matter because it was such a great place to work in. I particularly valued the caring relationships between staff and residents and the management style in the home.”

Six months after she joined the home she accepted the role of Deputy Director of Nursing. 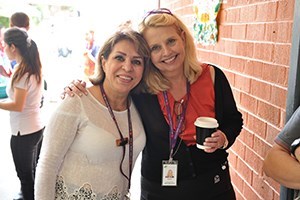 Sadly, Manezheh’s connection with aged care took on a personal note when her sister’s dementia progressed to the point where she required full-time care in an aged care home. While she was initially staying in a home closer to Manezheh’s home, in 2016 the decision was made for Mary to move in to Vaucluse Aged Care Home.

“She’s a lot more settled now and her husband and daughters visit often, even though she has trouble remembering them,” she said. “I can see her every day at work, even though it is very hard to watch her and her dementia deteriorating but I know that all the staff and management look after her very well, she gets lots of love and attention from them and receives the best care. Mary was not only my sister, she was also my best friend but now because of the dementia I feel I have lost that with her.”

After almost nine years of working at Vaucluse, Manezheh said she still enjoys being part of the home. Together with Mary she enjoys all the events the staff hold, such as Christmas and Anzac Day services, Easter and resident birthday parties.

“I am lucky to work with such friendly people like Joy, Maria, Chris and all the other staff at Vaucluse,” she said. “I also enjoy the Hall & Prior end of year Long Service and Directors’ Awards event every year. I feel like it shows that this organisation cares a lot about their staff.” 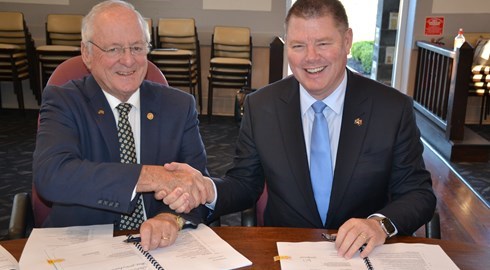 Hall & Prior has expanded to the South West to operate Donnybrook's Tuia Lodge.